The end of the year is a good time to stop for introspection. I want to suggest to you there are indicators or measurements that any congregation can use to determine whether or not they are healthy, if they are fulfilling the Great Commission as we are commanded to. Also, we could measure salvations, and we should. I hope you continue to pray for the one in your life who needs the Lord. In 2019 we saw many of our “ones” come to Christ and we’re praying for many more in 2020. We should measure baptisms and we could measure those who are prodigals who return to the Lord.  There are so many other ways we can measure church health. But one of the primary things a church should be able to recognize is that God is calling out from among our own those the ones who will be our leadership now and to the next generation. 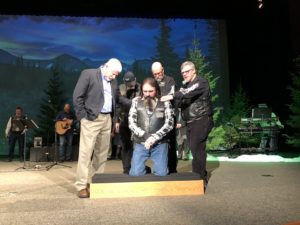 The first kind of laying on of hands is when one is called to the ministry and the congregation recognizes that and we license them to the gospel ministry. On December 29 at Emmanuel, that person was Donnie Zier. Many of you know Donnie. He has been a member of our congregation for several years now. Donnie knew the Lord as a young boy but then wandered away from that. As he was looking to come back to the Lord, the Holy Spirit led him to Emmanuel. We have had many chances to meet and talk and Donnie has jumped in to do everything we’ve asked him to over the years. When we had a chance to do something outside our walls, we combined together with Set Free Ministries to start a church in Billings—Racers Set Free. We didn’t necessarily know how that would happen, but God knew. He had already placed Donnie in our midst and he had already joined in that work.

Licensing is the beginning of ministry. It’s our endorsement in that calling. So we had Donnie kneel and joined together in a dedicatory prayer. After completion of the prayer we presented a certificate of license which reads as follows:

Donnie Zier Sr.
Who has given evidence that God has called him into
THE GOSPEL MINISTRY
was licensed to preach the Gospel as he may have opportunity,
and to exercise his gifts in the work of the Ministry
by the Emmanuel Baptist Church
at Billings, Montana on the 29th day of December, 2019

We will continue to pray God’s blessings on Donnie and his ministry. 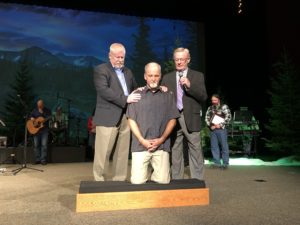 Licensure to the gospel isn’t the only affirmation in the life of a pastor. It’s the beginning. When a pastor matures and we are confident of his leadership, even of other pastors, there is another endorsement called ordination. We continued in the service allowing the church to be part of the ordination of Pastor Michael Laird. Many of you know Michael, who has been on our staff for some time. It’s because of our long association with him that we can know and recognize in him the calling of the Holy Spirit of God. Michael grew up at Emmanuel. He was saved as part of this congregation and was baptized by Pastor Don. He went away to college, was a missionary in the Canary Islands, returned to Montana as a church planter, pastored in Columbus and then joined our staff.

Many times in an ordination there is doctrinal examination and the evidence of calling but we already know all of these things about Pastor Michael. Now he is starting in a new role for us as pastor of the NextUp Ministries geared for the next generation. He is going to supervise everything cradle through college. Because of that, it seemed an important and right time for us to lay hands on him as well.

We had Michael kneel and joined together in a dedicatory prayer. After completion of the prayer we presented a certificate of ordination which reads as follows:

We, the undersigned, upon the recommendation and request of
the Emmanuel Baptist Church at Billings, Montana, which had
full and sufficient opportunity for judging the God-given gifts,
and after satisfactory examination by us in regard to the
Christian experience, call to the ministry, and views of Bible
doctrine, hereby certify that
Michael L. Laird
was solemnly and publicly set apart and
ordained to the work of
THE GOSPEL MINISTRY
by authority and order
of the Emmanuel Baptist Church
at Billings, Montana on the
29th day of December, 2019.

We pray God’s blessings on Michael and his ministry.

It was a wonderful day in the life of Emmanuel. As important a day as it was for Donnie and Michael, it was also an important day for us—we are the church God has called to work and the evidence that the Holy Spirit is working among us is that he calls out men and women to do the work of leadership in our church.

We rejoice in these things.

UPDATE: Sunday worship services will be available each Sunday morning for that week. You can… read more